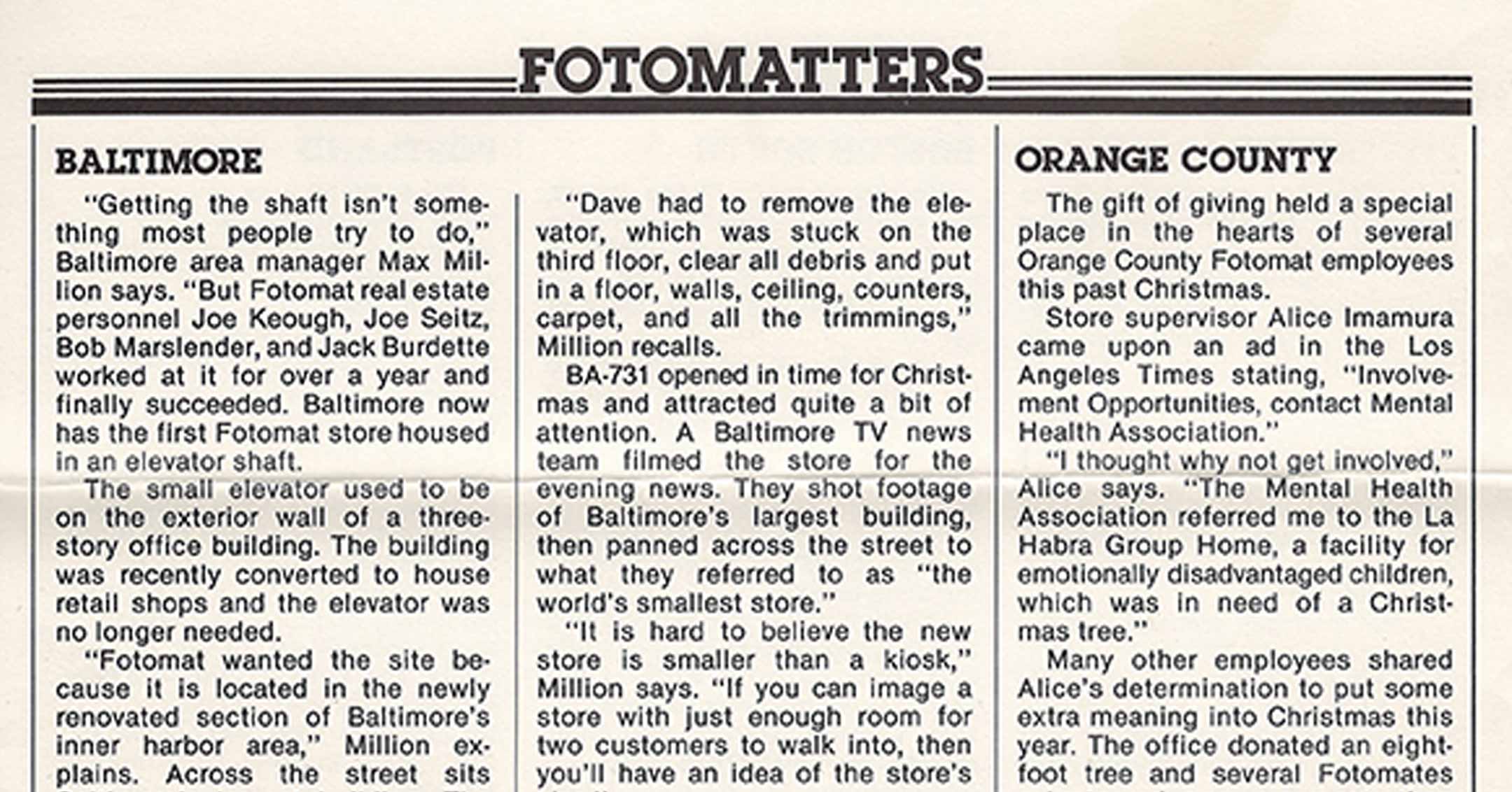 BALTIMORE
“Getting the shaft isn’t some-thing most people try to do,” Baltimore area manager Max Mil-lion says. “But Fotomat real estate personnel Joe Keough, Joe Seitz, Bob Marslender, and Jack Burdette worked at it for over a year and finally succeeded. Baltimore now has the first Fotomat store housed in an elevator shaft.

The small elevator used to be on the exterior wall of a three-story office building. The building was recently converted to house retail shops and the elevator was no longer needed.

“Fotomat wanted the site because it is located in the newly renovated section of Baltimore’s inner harbor area,” Million ex-plains. Across the street sits Baltimore’s largest building. The 200-year-old warship, the Constellation, is moored a block away. Thousands of people work in the vicinity, and the city’s annual fair, which draws over a million people, is held nearby.

Just because it was a small space, negotiations were not easy. This was the first time Fotomat had requested an elevator shaft for use as a store-front unit. When the plans for conversion were ruled to be in line with Baltimore’s building codes, construction engi-neer Dave Luxton was ready to work his miracles. ftwid Taos*

“Dave had to remove the elevator, which was stuck on the third floor, clear all debris and put in a floor, walls, ceiling, counters, carpet, and all the trimmings,” Million recalls.

BA-731 opened in time for Christ-mas and attracted quite a bit of attention. A Baltimore TV news team filmed the store for the evening news. They shot footage of Baltimore’s largest building, then panned across the street to what they referred to as “the world’s smallest store.”

“It is hard to believe the new store is smaller than a kiosk,” Million says. “If you can image a store with just enough room for two customers to walk into, then you’ll have an idea of the store’s size.”

Plans are underway to have Baltimore’s Mayor William Donald Schaefer preside over the store’s grand opening. Fotomates Diane Bert and Mary Vaughn report that customers can’t believe the size of the store.

Sales are terrific. Diane and Mary have won several merchandise contests since opening the store. With the elevator store situated on ground level, they figure the only way sales can go is straight up.

ORANGE COUNTY
The gift of giving held a special place in the hearts of several Orange County Fotomat employees this past Christmas.

“I thought why not get involved,” Alice says. “The Mental Health Association referred me to the La Habra Group Home, a facility for emotionally disadvantaged children, which was in need of a Christ-mas tree.”

Many other employees shared Alice’s determination to put some extra meaning into Christmas this year. The office donated an eight-foot tree and several Fotomates volunteered more ornaments than the tree could hold.

“When our gift was delivered, the children were overwhelmed by the glittering ornaments and the giant tree,” Alice says. “Their joy was firmly imbedded into the minds of all the people involved.”

Alice thanks all those involved who made her Christmas as meaningful as that tree was to those who received it.