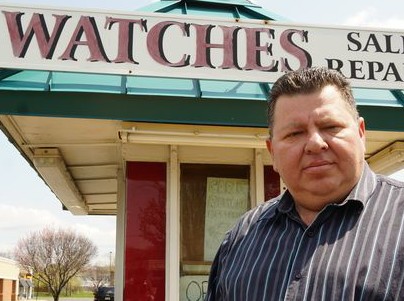 Have you seen this man in Freehold?

In 1985, Joseph Barjudinas came here from Lithuania with a vision – that’s it. Now, he’s found his “bread and butter,” and the story is pretty incredible.

When I call Joseph Barjudinas on a Friday morning, he spends much of the conversation apologizing.

“Hold on Shari, I’m sorry, I have customers,” he says repeatedly. I hear someone else through the line. “I was sent over by a jewelry store,” one of his customers shouts from the car. “Let me see,” Barjudinas says to the man. “OK, it will be ready by 1 p.m.”

What on earth are they talking about? Watches. Barjudinas, 51, of Manalapan lived in Lithuania until 1985 — and his heavy accent is hard proof.

“My dream was to see this country,” he tells me. “I came to Brooklyn and met my wife, Natalia. We got married, and I had a car service in Brighton Beach.”

So what brought this man to the Jersey Shore, and how has he become a well-known fixture in the area? Let’s rewind the clock a bit. In 1997, Barjudinas moved out of New York and into Old Bridge with his family. He has two sons — 25 and 22 — and a 9-year-old daughter.

“My father was a watchmaker,” he says. “He always told me, ‘If something doesn’t work out with what you want to do,you learn this trade and will always have something to put bread and butter on the table.’ I didn’t want to work in car service, and it came to that point.”

Barjudinas worked for a few watch companies while living in New York — Parker and Ebel, he tells me.

“Sylvester Stallone, Barbara Walters, Don Johnson and Mike Tyson used to come in with their watches,” Barjudinas says. “I worked Saturdays at Ebel, in their boutique on 63rd Street.”

When he came down to Jersey, Barjudinas opened up his own watch-repair shop in Manalapan, called The Watch Stop. In 2000, he made a move — and turned the area’s last-standing Fotomat into his “bread and butter.”

For those unfamiliar with the term (I’m talking to the “kids” here), Fotomats were popular through the early ’80s. People dropped their film to be developed at these kiosks and would return to pick up their pictures at a designated time. Barjudinas found his dream spot at 4345 Route 9 in Freehold, in the Pond Road Shopping Center. Anyone know it?

“I always knew I didn’t need a big place to repair watches,” he explains. “I found the landlord, and it was just $300 a month to rent the place back then. This is a one-man operation, and it’s a busy location. It’s the perfect setting.”

Customers — like the several he speaks with during this interview — drive up and drop off their watches to be repaired. The man I referenced earlier was sent by Gary Michaels in Manalapan.

Barjudinas does everything from battery replacement to full overhauls. Watches range from basic to designer, and nothing is off limits. What does it cost to fix a watch? Anywhere from $5 to $350, depending on the issue.

“People drop them off and pick them up later that day, or sometimes, it takes longer,” he says. “Some people bring 20 watches at once.”

On a busy day, Barjudinas says he serves up to 50 customers. He does no advertising and relies simply on word of mouth and reputation. How is he able to sustain a successful business like that?

“First of all, it’s honesty,” Barjudinas says. “I never try to cheat somebody. I’m not just trying to get the dollar, people trust me. They keep coming back and telling other people. You can’t fool anybody. If you don’t do the right thing, nobody is gonna come to me — and vice versa.”

Barjudinas is keeping it in the family, and his son has a similar set-up at the Marlboro Shopping Center — it’s called Battery Express.

The family is really planting strong roots at the Shore, evidenced by Barjudinas’ appreciation of the area’s most coveted treasures: the beach and the Boss.

“I love Bruce Springsteen’s music,” he tells me. “He’s a great musician — ‘Born in the U.S.A.’ is one of my favorites. Bon Jovi too, I saw him in Giants Stadium. What’s that song? ‘Runaway,’ I love that one.”

As for the beach and the boardwalk, Barjudinas loves taking his daughter to Seaside Heights, Point Pleasant and Manasquan. He doesn’t get much free time, though, as The Watch Stop is open six days a week — 10 a.m. to 5:30 p.m. Mondays through Fridays and 10 a.m. to 3 p.m. Saturdays. Because it’s a solo operation, he’s pretty much working around the clock, so to speak. I ask him about expansion plans, and for now, there’s nothing in the cards.

“I can’t because I have to do the work myself,” he says. “It’s not something I can train somebody because it takes years and years to learn this trade. I’m still learning the new watches.”

Barjudinas seems to be living the American Dream. He came to this country with nothing hopes, and that’s a big leap of faith.