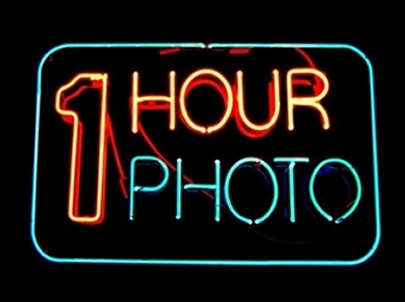 (NEWSER) – Sure, the digital revolution has brutalized video-rental stores and slashed newsstand numbers in half—but consider the poor one-hour photo shop. Those friendly kiosks and stores have fallen off by a stunning 94% since 1998, the worst decline of all business categories in the US Census. “The photo business is dead,” says Dae Kim, whose Happy Photo in Queens, NY, still offers one-hour processing. But things looked rosy back in 1968, when color photography became popular and US entrepreneur Preston Fleet started Fotomat, Bloomberg reports. Americans loved dropping off photos at those kiosks before going shopping, so much so that 1,800 locations popped up within two years and Fotomat eventually got listed on the New York Stock Exchange.

But in the 1980s, minilabs appeared with on-site processing (Fotomat shipped its film out), and big retailers like supermarkets and pharmacies muscled in with photo-processing as a loss leader to draw in customers. Then digital cameras and smartphones came along and killed the party for all concerned. But die-hard photo-processors still argue that digital photos are more liable to vanish over time than hard copies. And some photographers have returned to film photography for various reasons—like wanting to be different or get that grainy look, the BBC reports. “The most reassuring scenario I’ve noticed recently is the emergence of older men and women wanting to use film again,” says Charlie Abbiss, co-founder of Film’s Not Dead. “They want the negatives, the envelope, the little prints, and something to hold onto for years to come.”